The Legacy of Lee Kuan Yew: it may not be corporal punishment, but inequality that made Singaporeans unhappy.

Everybody, okay, not everybody but at least some people (my students for example) seem to talk about the 'legacies' of Lee Kuan Yew even though I know little to nothing about Singapore. While there are different narratives, the idea generally agreed upon seems to go like "although he did some bad things like corporal punishment and political repression, he's made Singapore and Singaporeans richer".

Or not. The country did achieve an unparalleled level of economic growth in the region against all odds and in no small part did the first prime minister play a role.

What often gets overlooked in this sort of stories is development (as opposed to growth). Development, though often used interchangeably with growth, has a lot to do with the quality of lives of ordinary people (at least according to these people).

Singapore is ranked as low as 90th out of 151 countries in terms of how happy and sustainable their people are (not adjusted for inequality). 91th is Egypt.

Yes, comparatively speaking, Singapore has fared pretty well, though not great, in terms of income inequality. The latest Gini coefficient available for the country is about 0.37 (as of 2000 according to Solt 2011. Singapore does not seem to report, or perhaps did not even surveyed, their income inequality data in the past decade), which is similar to that of the United States (hence not great!). 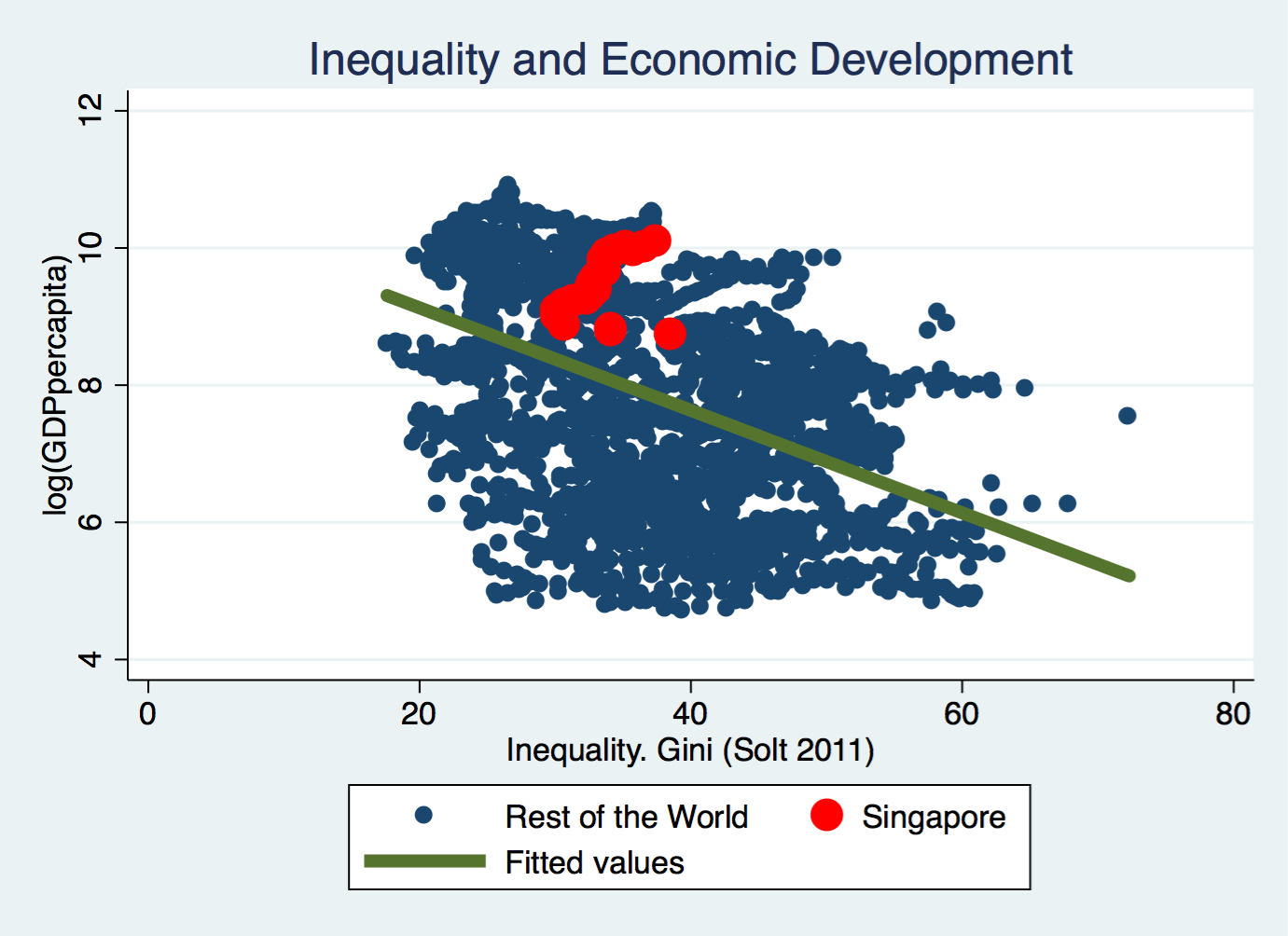 What really adds up to the story is that the income redistribution has progressively deteriorated over the time. The figure above indicates that as the country became richer, it also became unequal (right-upward trend of the red dots: GDPpc of Singapore, like most other countries, has only increased over time).

More importantly, this goes against the general trend where inequality, although quite modestly, winds down with economic growth. The fact that the cases of Singapore all stay upper-right of, and stand over time further away from, the general trend (the green line) indicates that the country became more and more unequal in the past three decades or so than its peers at the similar level of economic growth.

Lee Kuan Yew may have significantly contributed to the increase of GDP of Singapore, but the way he did it seems to have a lot to do with making people unhappy by making relatively, increasingly, poor. Case studies have already shown this point pretty well (e.g., Haggard and Kaufman 2008) although some may point to Kuznet's Curve to vindicate Lee.

[Book Reviews] From Miracle to Maturity (2012) by Eichengreen et al.

I am somehow obsessed with posting my 'public' book reviews in Goodreads but here I want to post the context under which I chose to read and write about the book, which wouldn't necessarily be a 'review'.

I am currently using this book for my Korea at Global Context (GLOA 450-003), which is essentially about the political economy of rise and maturation(fall) of South Korea.

Although it seemed quite challenging to read for undergrads (most of whom seniors), what they talk about sheds pretty fresh light on how we are all making such a big fuss about the recent slowdown of Korean economy.

If students had some more background knowledge about South Korean political economy, having read such texts like Amsden, Wade, or Woo, the book would have better helped class discussions.

Posted by Unknown at 7:01 PM No comments: